The BeanBon Coffee Roaster is kicking off a crowdfunding campaign for its countertop smart roaster device, seeking a total of $10,000 over the next month. The BeanBon is already a fully realized product, and I was able to test one to confirm it matches its creator’s claims — and it does indeed offer a simple, easy way to get into at-home coffee roasting, with minimal expertise and cleanup required.

The BeanBon is a relatively small countertop device, about the size of your average juicer or drip coffee maker. It has a simple function: roast coffee beans, in small batches designed to be optimized for daily coffee drinking use. The machine itself arrives fully assembled, and is just as approachable in terms of ease of use as your average coffee maker.

At-home roasting can be accomplished in a number of ways, but BeanBon’s whole approach is designed around simplicity and flexibility. Out of the box, you can be roasting beans in no time with no prior experience, thanks to its simple manual settings. And if you want to get more in-depth, there’s an app for iOS and Android that lets you tune all the roasting settings to fit your exact tastes and needs.

BeanBon plans to retail its roaster for around $1,000, but is offering it to Early Bird backers for $699 during the Kickstarter campaign. 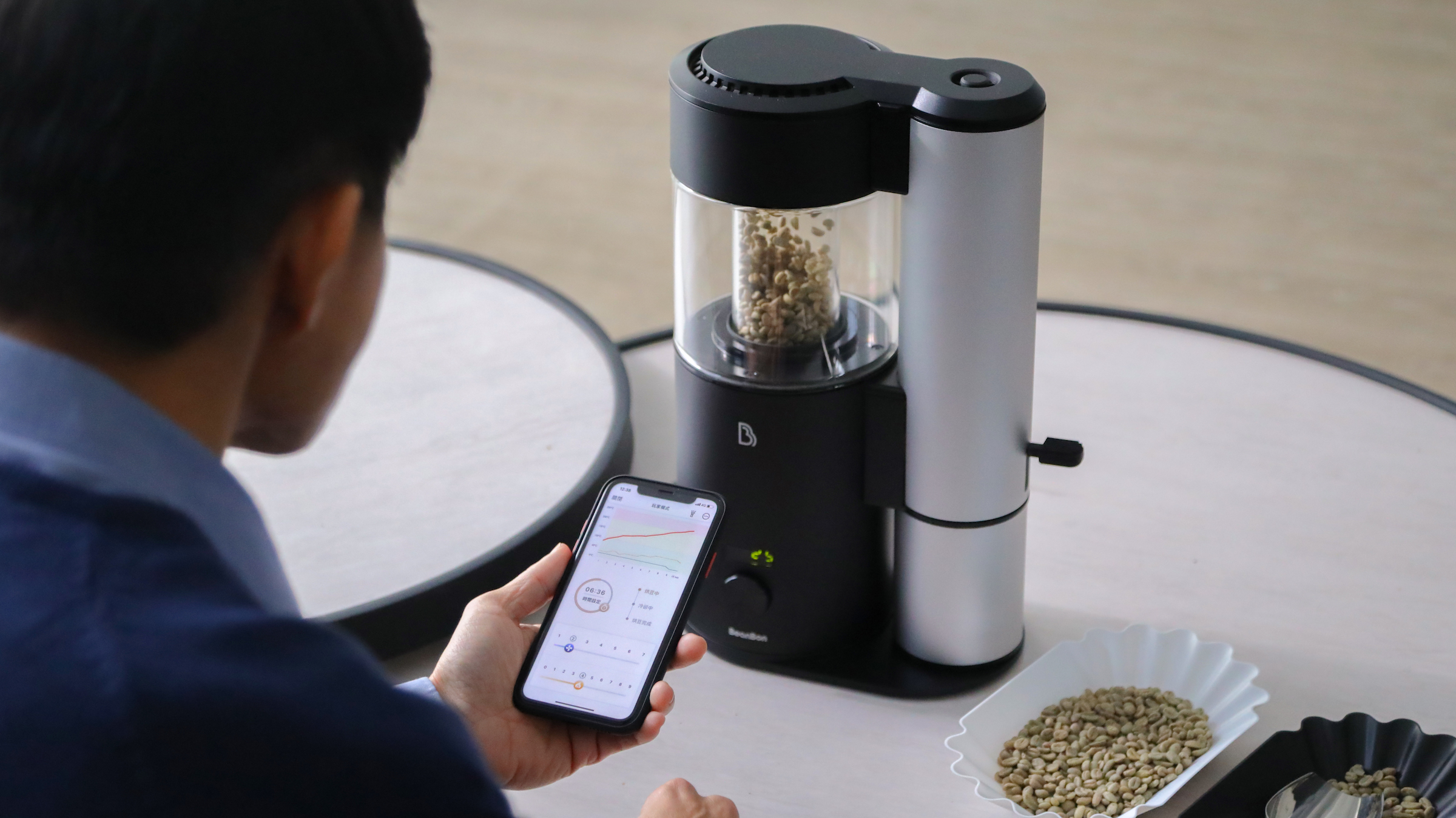 While the BeanBon I tested out is the product of a tooling sample, rather than the shipping version, it’s still pretty well put-together in terms of fit and finish. The exterior is black anodized aluminium and it feels sturdy and well-constructed. The design is modern but relatively understated, so it won’t look out of place in a modern kitchen atop the counter next to a coffee machine.

Because it’s a pre-release product, the tester version I received shipped in generic packaging and didn’t include any instructions. Luckily, none were required for me to figure out how to use it, and to get started actually roasting the two included packs of green coffee beans in just minutes. The design is clever and simple, and by referencing a promotional video for the BeanBon released in Asia, I was quickly able to get up and running.

Operating the BeanBon is as easy as removing the plastic lid of the machine and pouring beans into the central transparent roasting chamber. Once you turn on the the machine, you then turn the dial to select your roast level (1 to 8, 1 being the lightest) and then press to start. The roast cycle runs automatically, showing you a countdown timer. Once that timer runs down, there’s a cooling cycle that follows, and then you simply press a lever located on the side to drop the roasted beans into a collection bin.

One of the most clever things the BeanBon team has done is implement a fan that comes on automatically when you press this lever, which blows up the chaff (coffee bean shells that crack and shed during roasting) to be collected in an easy-to-clean filter located at the top of the machine while dropping the much heavier beans into the pot. Too much chaff can affect the taste of the coffee, resulting in increased bitterness, and this is a clever way to automate the chaff removal process.

One note about operation: The BeanBon roasting process did set off my condo’s smoke alarms, even though no smoke was visible. It gives off a strong (and very pleasant, if you’re a coffee lover) aroma while working, but this is likely enough to trigger your smoke detectors depending on the space in which you’re using it. Turning on the stove vent and using it near that seemed to solve the problem, as did ensuring I use it with windows open and fans going.

The pre-packaged BeanBon coffee I received had an included recommended roasting level, which also makes it very easy to get started. I wasn’t able to test the more advanced app-based features, because the software isn’t yet available here, but the manual modes worked exactly as advertised.

Roasting at home, especially with smart features, can be a very expensive affair — BeanBon’s price point at $699 (and $749 after the Early Bird units are gone) is remarkably low for what it can do. Over time, you can definitely realize cost savings from using unroasted beans and doing it yourself — green beans are easier to buy in bulk because they take longer to go bad than do roasted beans. But if you’re thinking about getting into this world, it’s probably better to be motivated by the skill and enjoyment of custom roasts than anything else.

BeanBon does lower the cleanup and skill requirements considerably, however, making at-home roasting pretty approachable. It’s a great way to get started, provided BeanBon meets its production goals and starts shipping these later this year, as it plans to do.