It sounds like Liquid Death has won over investors with its promise to “murder your thirst” — the startup is announcing that it’s raised $9 million in Series A funding.

Liquid Death sells water in a tallboy aluminum can, and it’s expanding the lineup with a sparkling water can that it plans to start shipping in March. A 12-pack of either regular or sparkling mountain water currently costs $18.99 on the Liquid Death website.

Co-founder and CEO Mike Cessario has worked as a creative director and copywriter at companies like VaynerMedia, and he told me that his goal is to create a brand that’s healthy and sustainable while being “just as exciting, if not more exciting, than energy drinks, soda, alcohol and candy.”

Hence the “murder your thirst” tagline, as well as a generally tongue-in-cheek approach to marketing, including aggressive, heavy metal-influenced art. The startup is expanding those efforts with a new “Keep the Underworld Beautiful” campaign that asks customers to save Hell itself from plastic bottles.

“When you’re launching a new brand, if you don’t have millions and millions of dollars to push it out there with [advertising], your only chance of survival is the product itself has to be insanely shareable,” Cessario said. “You’re going to have a hard enough time funding production. You’re not going to have the money to compete with the Cokes and the Pepsis, so the only way get it out there is if people organically want to share it because of the funny, irreverent marketing.”

As one piece of evidence that the message is resonating, the company says there are at least 20 “random customers” who have received Liquid Death tattoos. 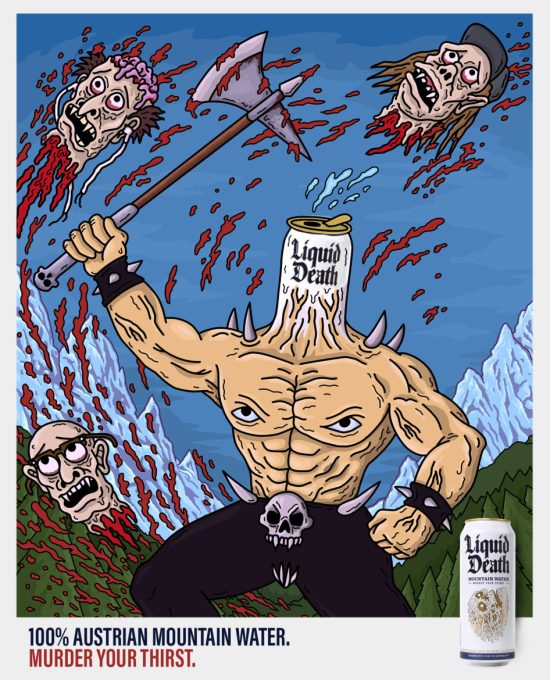 The emphasis on branding left me wondering whether the water itself was a bit of a sidenote. Cessario responded that when it comes to food and beverage products, branding is the biggest differentiator, because “consumers aren’t stupid.” They don’t actually believe that one product is dramatically better than the other; it’s more about which brand they feel affinity with.

At the same time, he said that when it comes to turning Liquid Death into more than a one-time novelty purchase, “The most important thing, first and foremost, is that when someone buys it, they enjoy drinking this water from a can. When they actually have a freezing cold can of Liquid Death, people will continue to come back because they like the product experience.”

I’ll note that I’ve tried out Liquid Death myself and can confirm that it’s perfectly fine water. Most notably, there’s something genuinely fun and satisfying about cracking open a new can (though if you do it work, you also risk drawing some suspicious or amused stares from your coworkers).

Cessario also argued that the brand is about “so much more than loud marketing, it’s about sustainability.” The company makes a big point out of the fact that its aluminum cans are made out of more than 70% recycled material, and that aluminum is “infinitely recyclable,” making the packaging much more environmentally friendly than plastic bottles. Liquid Death also donates 5 cents for every can sold to nonprofits like 5 Gyres (which fights plastic pollution) and Thirst Project (which works on providing access to clean drinking around the world).

The sustainability message has prompted criticism around the fact that packaged water — even if it’s in an aluminum can — is less sustainably than simply filling up a reusable container with tap water.

“We’re definitely not against reusable bottles,” Cessario said when I brought this up. “But the reality is: Do you think it’s possible to actually get 300 million people, people in the Midwest, to do that 100 percent of the time? It’s highly unrealistic.”

Instead, he suggested that he’s happy for people to drink tap water from reusable bottles when it makes sense, and they can turn to Liquid Death at other times — “at a concert venue, when you’re having a house party, when you’re at a bar.”

Cessario said that until now, the majority of the startup’s sales have either come from its website or from Amazon, but one of the main aims with the funding is to get the water into brick-and-mortar stores. In fact, it’s already taking a big step in that direction, with nationwide availability in Whole Foods stores planned for next month.