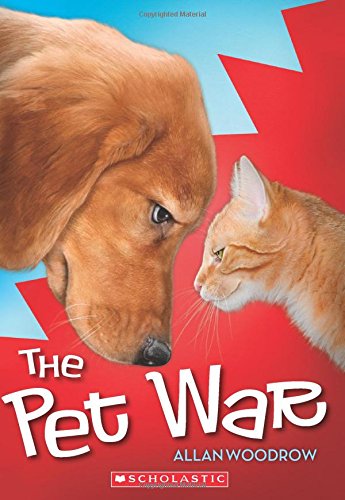 THE PET WAR is a hilarious story about the timeless battles of dog vs. cat, brother vs. sister, know-it-all vs. know-nothing.
Eleven-year-old Otto wants a dog. His twelve-year-old perfect sister, Lexi, wants a cat. Their mother, who works very long hours as a nurse, wants neither. Pets are expensive so who’s going to pay for everything? And what happens to the pet when the siblings are at their dad’s for the weekend?
Otto has an idea. What if he got a job and earned enough money to pay for the dog? Then Lexi has to open her big mouth. She proposes that whichever sibling can raise enough money first will decide which pet they get. Oddly enough, their mom and dad agree.
With Otto and Lexi each out to defeat the other, their business plans become more elaborate and involved. As the competition gets fiercer, the stakes get higher, and the battle lines have been drawn, so let the Pet War begin. . . .


Allan Woodrow is the author of Unschooled, Class Dismissed, and The Pet War, as well as other books for young readers, written under secret names. His writing also appears in the Scholastic anthology Lucky Dog: Twelve Tales of Rescued Dogs.
Allan currently lives near Chicago with his family. For more about Allan and his books, visit him online at www.allanwoodrow.com.