Juro, a UK startup that’s using machine learning tech and user-centric design to do for contracts what Typeform does for online forms, has caught the eye of Union Square Ventures. The New York-based fund leads a $5 million Series A investment that’s being announced this morning.

Also participating in the Series A are existing investors Point Nine Capital, Taavet Hinrikus (co-founder of TransferWise) and Paul Forster (co-founder of Indeed). The round takes Juro’s total raised to-date to $8M, including a $2M seed which we covered back in 2018.

London is turning into a bit of a hub for legal tech, per Juro CEO and co-founder Richard Mabey — who cites “strong legal services industry” and “strong engineering talent” as explainers for that.

It was also, he reckons, “a bit of a draw” for Union Square Ventures — making what Juro couches as a “rare” US-to-Europe investment in legal tech in the city via the startup.

“Having brand name customers in the US certainly helped. But ultimately, they look for product-led companies with strong cross-functional teams wherever they find them,” he adds.

Juro’s business is focused on taking the tedium out of negotiating and drawing up contracts by making contract-building more interactive and trackable. It also handles e-signing, and follows on with contract management services, using machine learning tech to power features such as automatic contract tagging and for flagging up unusual language.

All of that sums to being a “contract collaboration platform”, as Juro’s marketing puts it. Think of it like Google Docs but with baked in legal smarts. There’s also support for visual garnish like animated GIFs to spice up offer letters and engage new hires.

“We have a data model underlying our editor that transforms every contract into actionable data,” says Mabey. “Juro contracts look like contracts, smell like contracts but ultimately they are written in code. And that code structures the data within them. This makes a contract manager’s life 10x easier than using an unstructured format like Word/pdf.”

“Still our main competitor is MS Word,” he adds. “Our challenge is to bring lawyers (and other users of contracts) out of Word, which is a significant task. Fortunately, Word was never designed for legal workflows, so we can add lots of value through our custom-built editor.”

Part of Juro’s Series A funds will be put towards beefing up its machine learning/data science capabilities, per Mabey — who says the overall plan at this point is to “double down on product”, including by tripling the size of the product team.

“That means hiring more designers, data scientists and engineers — building our engineering team in the Baltics,” he tells us. “There’s so much more we are excited to do, especially on the ML/data side and the funding unlocks our ability to do this. We will also be building our commercial team (marketing, sales, cs) in London to serve the EU market and expand further into the US, where we already have some customers on the ground.”

The 2016-founded startup still isn’t breaking out customer numbers but says it’s processed more than 50,000 contracts for its clients so far, noting too that those contracts have been agreed in 50+ countries. (“Everywhere from Estonia to Japan to Kazakhstan,” as Mabey puts it.)

Another vertical it’s recently expanded into is media, he notes.

“E-signature giants have grown massively in the last few years, and some are gradually encroaching into the contract lifecycle — but again, they deal with files (pdfs mostly) rather than dynamic, browser-based documentation,” he argues, adding: “In terms of new legal tech entrants — I’m excited by Kira Systems especially, who are working on unpicking pdf contracts post-signature.”

As part of the Series A, Union Square Ventures parter, John Buttrick, is joining Juro’s board.

Commenting in a supporting statement, Buttrick said: “We look for founders with products equipped to change an industry. While contract management might not be new, Juro’s transformative vision for it certainly is. There’s no greater proof of the product’s ease of use than the fact that we negotiated and closed the funding round in it. We’re delighted to support Juro’s team in making their vision a reality.” 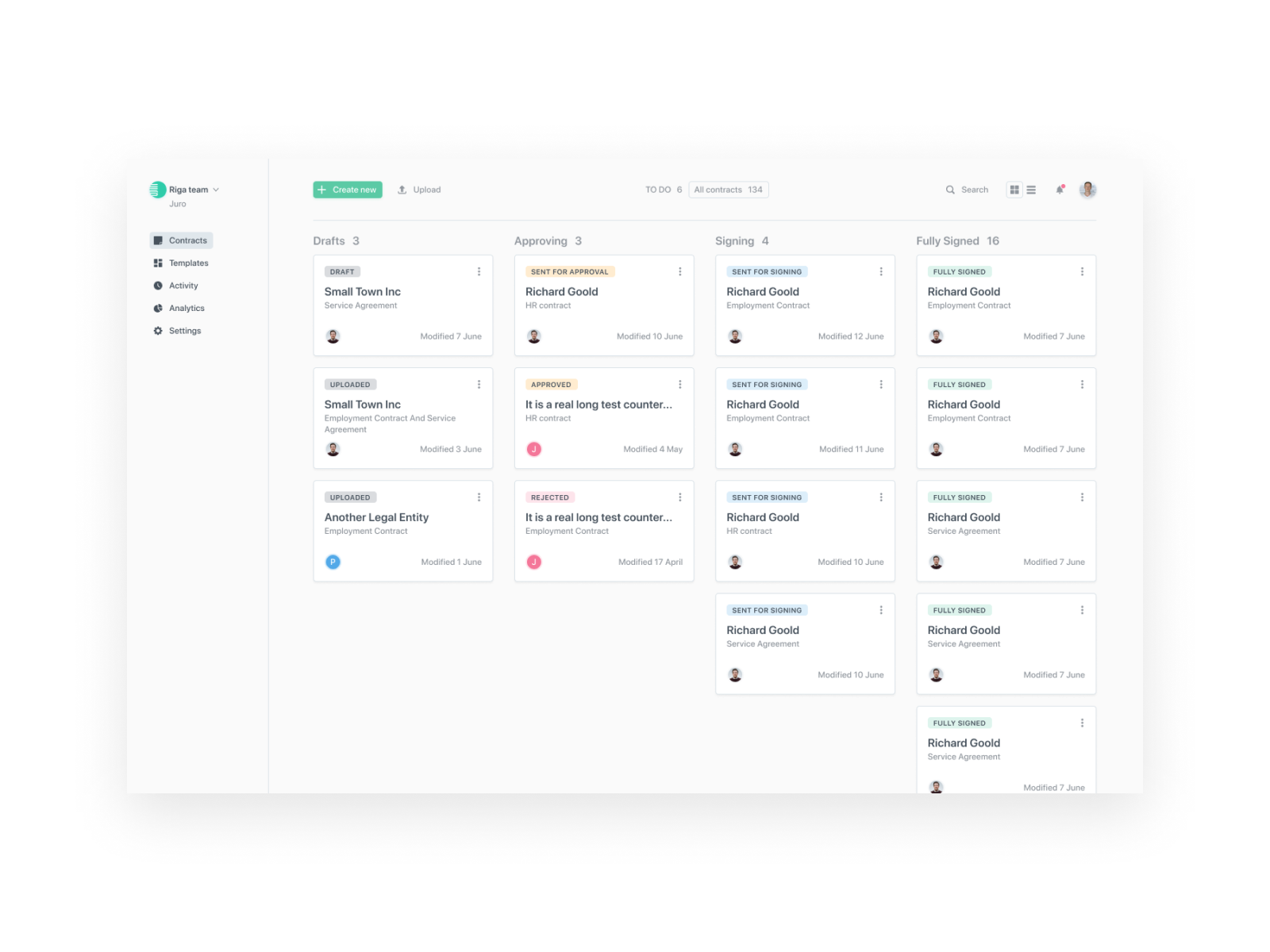