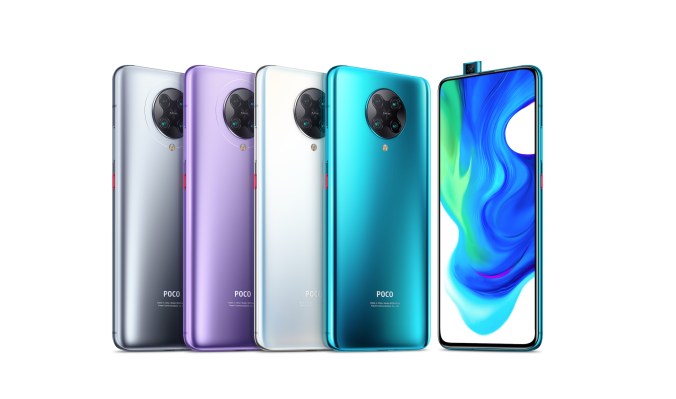 POCO, a brand that spun out of Chinese electronics giant Xiaomi earlier this year, today launched the POCO F2 Pro smartphone as it kickstarts its new journey as an independent firm.

The POCO F2 Pro, like its two-year-old predecessor Pocophone F1 smartphone, punches above its price class. It features an all-screen 6.67-inch FHD+ AMOLED display (with 2400×1080 pixels), in-screen fingerprint scanner, support for 5G, quad-core rear camera setup, and a pop-up front camera that quietly tucks away when not in use. It also features a 3.5mm headphone jack.

The dual-SIM card supported smartphone is powered by Qualcomm’s flagship octa-core Snapdragon 865 processor, coupled with Adreno 650GPU. POCO F2 Pro also sports what the company claims to be the largest vapor chamber in any smartphone to support LiquidCool, a technology that keeps the device cool even when high-end operations such as graphics intensive games are being played.

On the camera front, the POCO F2 Pro features a 64MP Sony IMX686 sensor, which serves as the primary camera, with a 13MP ultra wide-angle lens, a 5MP macro and one 2MP depth sensor. The pop-up camera, that serves as the selfie sensor, is a 20MP lens. The rear camera setup is capable of recording videos in 8K resolution at 24fps, and 4K in 60fps.

The POCO F2 Pro, which comes in Neon Blue, Electric Purple, Cyber Grey, Phantom White colors, houses a 4,700mAh battery with support for fast charging and ships with a 33W charger in the box.

POCO listed a number of additional features that other flagship Android smartphones offer such as support for HDR10+ video, brightness of 500 nits, Corning Gorilla Glass 5 that protects the display, and an IR blaster. But its display lacks support for 120Hz refresh rate, as seen on OnePlus 8T Pro, that makes viewing experience extra smooth.