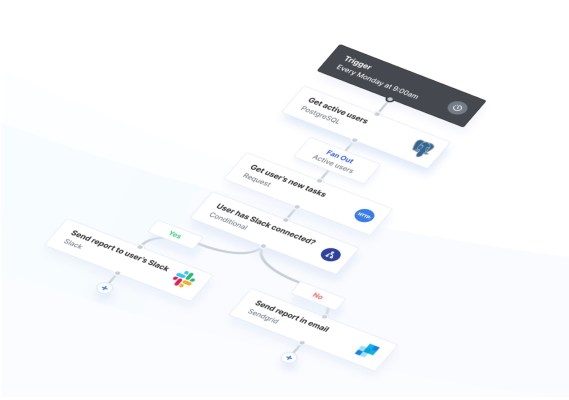 Low-code is a hot category these days. It helps companies build workflows or simple applications without coding skills, freeing up valuable engineering resources for more important projects. Paragon, a member of the Y Combinator Winter 2020 cohort, announced a $2.5 million seed round today for its low-code application integration platform.

“Paragon makes it easier for non-technical people to be able to build out integrations using our visual workflow editor. We essentially provide building blocks for things like API requests, interactions with third party APIs and conditional logic. And so users can drag and drop these building blocks to create workflows that describe business logic in their application,” says company co-founder Brandon Foo.

Foo acknowledges there are a lot of low-code workflow tools out there, but many like UIPath, Blue Prism and Automation Anywhere concentrate on Robotic Process Automation (RPA) to automate certain tasks. He says he and co-founder Ishmael Samuel wanted to focus on developers.

“We’re really focused on how can we improve developer efficiency, and how can we bring the benefits of low code to product and engineering teams and make it easier to build products without writing manual code for every single integration, and really be able to streamline the product development process,” Foo told TechCrunch.

The way it works is you can drag and drop one of 1200 predefined connectors for tools like Stripe, Slack and Google Drive into a workflow template, and build connectors very quickly to trigger some sort of action. The company is built on AWS serverless architecture, so you define the trigger action and subsequent actions, and Paragon handles all of the back-end infrastructure requirements for you.

It’s early days for the company. After launching in private beta in January, the company has 80 customers. It currently has 6 employees including Foo, who previously co-founded Polymail and Samuel, who was previously lead engineer at Uber. They plan to hire 4 more employees this year.

With both founders people of color, they definitely are looking to build a diverse team around them. “I think it’s already sort of built into our DNA. As a diverse founding team we have perhaps a broader viewpoint and perspective in terms of hiring the kind of people that we seek to work with. Of course, I think there’s always room for improvements, and so we’re always looking for new ways that we can be more inclusive in our hiring recruiting process [as we grow],” he said.

As far as raising during a pandemic, he says it’s been a crazy time, but he believes they are solving a real problem and that they can succeed in spite of the macro economic conditions of the moment.